“Imagine having all of your freedoms taken away, being forced to work against your will, and constantly living under the threat of violence - in short, being forced to live as a slave. Sadly, this situation is a reality for millions of children, women, and men each year as part of the global human trafficking industry.“

A multi sectoral approach is needed which will undertake preventive measures to arrest trafficking especially in vulnerable areas and sections of population and to enable rescue, rehabilitation and re-integration of the trafficked victims.

Keeping the above issues and gaps in mind the Ministry has formulated a Central Scheme “Comprehensive Scheme for Prevention of Trafficking for Rescue, Rehabilitation and Reintegration of Victims of Trafficking for Commercial Sexual Exploitation-Ujjawala”. The new scheme has been conceived primarily for the purpose of preventing trafficking on the one hand and rescue and rehabilitation of victims on the other.

People’s Forum has been running a Ujjawala home since 2009 in the district of Khordha for rescuing the victims from the place of their exploitation and relocating them to a safe custody. The project targets one of the most vulnerable sections of the society who have been trafficked for commercial sexual or domestic work. Social mobilization and other awareness initiatives are taken up for creating awareness at various levels.

To established a barrier free environment for the victims of trafficking and generate awareness for prevention of trafficking by empowering individuals through education and collaborative actions.

Our goal is to create an environment in which victims of human trafficking can be empowered, educated, and self- confident.

Objective of the Program:

Components Of The Scheme

Women and children who are vulnerable to trafficking for commercial sexual exploitation. The current strength of the home is 28 out of which two are minor cases. The women are provided various trainings to help them become economically independent in the days to come. Currently they are being provided training on Bamboo craft and tailoring.

The Ujjawala home forms Community vigilance groups, Balika & Balal Sanghas for the prevention of women and child trafficking and also organises activities like street plays, awareness camps, sensitization workshops/seminars and puppet shows to spread adequate awareness about the implication of trafficking in interior areas of the State.

Till date people s forum Ujjawala has rescued 169 women belonging to different areas of the state with the help of police, members of community, vigilance groups and Balika / Balal sanghas, of which 103 numbers of women are rehabilitated with their families. In an attempt to make the inmates financially independent they are provided with various vocational trainings on bamboo crafts, tailoring and kitchen gardening. 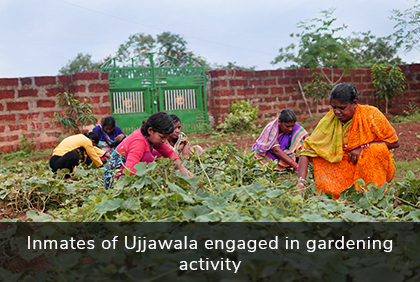